Eye on the Prize: What Every First Time GC Should Know

Over the past two years, 650+ general counsel have assumed the role for the first time in the United States. To help these GCs acclimate, we surveyed more than 150 current general counsel and asked them for their best advice and what they wish they had known when they took their first GC role. For the aspiring general counsel, the top legal role offers career fulfillment and well-earned recognition of their hard work. But the general counsel seat comes with unexpected challenges and responsibilities.

In this one-hour webinar, MLA’s Edina Beasley sat down with Leslie Cleaver, general counsel at Aceable, Inc., and Ilona Levine, general counsel and corporate secretary at Internet Society, for a conversation around their best advice and what they wish they had known when they took their first roles. They discussed: 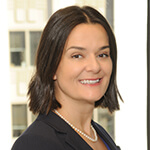