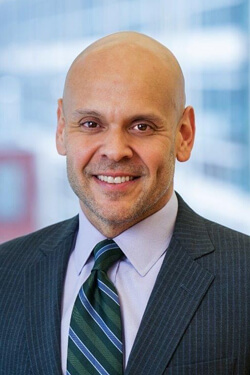 Louis Ramos is a Managing Director in our Washington, D.C., office and a member of our Partner Practice Group. Having been a law firm partner, an Assistant United States Attorney and a senior in-house lawyer at a Fortune 100 company over his 22-year legal career, Lou brings a unique perspective to legal recruiting. He uses his extensive experience in the legal profession to advise potential candidates and clients on the lateral partner market overall as well as specific opportunities.

Lou is originally from New York City and has lived and worked in the Washington, D.C., area since 1997. He currently resides in northern Virginia with his wife, who is also a lawyer, and their three children. Lou is an avid runner and basketball fan.

Prior to joining Major, Lindsey, & Africa, Lou was a partner at DLA Piper and Morgan Lewis, where he focused on significant white-collar litigation, government and internal investigations, and compliance counseling.  Before returning to law firm practice, Lou was an assistant general counsel with Pfizer where he managed a team of lawyers responsible for investigations around the globe.

Lou also served for over five years as an Assistant United States Attorney in the District of Columbia, where he was the lead prosecutor in 19 jury trials and directed numerous investigations into violations of federal and local criminal laws, including mail and wire fraud, money laundering, counterfeiting, narcotics trafficking, human trafficking, murder and other violent crimes. While at the U.S. Attorney’s Office, Lou was the recipient of numerous special achievement awards and a commendation from the United States Secret Service for his work on a counterfeiting investigation.