Up and Comers Under 40 Q&A Ahana Nabhajit 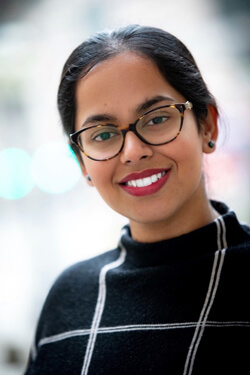 What attracted you to Major, Lindsey & Africa?

I loved how global the platform was and wanted to work for such a sophisticated brand. When I interviewed, I loved everyone I met and found them very warm. The rest is history!

What is the best part of your job?

I absolutely love working with my team, sharing the (many!) stressful times and the successes between us.

What is the most surprising part of being a recruiter?

The friends I’ve made that started as purely professional contacts.

How would you describe your career in 5 words or less?

Describe one of your successes thus far at Major, Lindsey & Africa.

I once spoke at a roundtable event for lawyers returning to work after an extended break, and at the end of the event, a lady asked for my number and wanted to know if she could realistically hope to get another full-time role again. She really wanted to work. She was a terrific lawyer but had been in an accident (and broken her neck) and had no option but to take eight years out of work. Honestly, it was difficult to find her another role in that market. Incidentally, I also had a client then who wanted a junior lawyer and wanted to pay lower than market rates but was struggling with the market. It took a number of conversations (one of which took place over a few glasses of wine) and I managed to convince the client to see the lady. They ended up loving her, hired her for a 12 month contract… and now she’s permanently there! She sends me the nicest Christmas cards that remind me why this job does make a difference!

What advice would you give to someone considering becoming a recruiter?

Be prepared for the losses – they’re part of the job – but they pale in comparison to the successes. So, aim high and keep going!

If you weren’t a lawyer or a recruiter, what career would you have had?