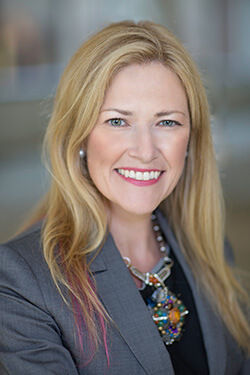 Elizabeth Smith is a Managing Director and Office Leader for Interim Legal Talent in our Boston office where she specializes in the recruitment and placement of experienced attorneys, paralegals, contracts managers and compliance professionals for substantive assignments in both law firms and in-house legal departments.

Elizabeth is a frequent contributor and panelist for the Massachusetts Bar Association, the Boston Bar Association, Lawyers Concerned for Lawyers and various law schools as she is a recognized networking and job searching expert. She is also active in various children's charities, including the Elizabeth Glaser Pediatric AIDS Foundation and City Year. Elizabeth lead Cycle For Survival Teams in 2017 and 2018. In 2019, she will again lead a team and will also serve as a “Survivor Rider” riding at least four hours straight to honor her father, who lost his battle to a rare gastric cancer.

Prior to joining Major, Lindsey & Africa, Elizabeth served as the director of candidate recruitment and development in Counsel On Call's Boston office. There she provided seasoned contract attorneys and paralegals on an as-needed basis to law firms and legal departments throughout the country. Notably, she assisted a Fortune 500 legal department with the revamping of its legal hiring practices and created a rotational paralegal program, saving the department more than $1,000,000 per year.

Previously, Elizabeth worked as a commercial litigation associate in the Hartford offices of LeBoeuf, Lamb, Greene & MacRae (which became known as Dewey & LeBoeuf) and Halloran & Sage. At LeBoeuf, she assisted a Fortune 500 manufacturing client with post-closing environmental remediation issues and served as one of the firm's electronic discovery and strategy experts. While at Halloran, she represented companies ranging from small businesses to Fortune 500 insurance companies on issues ranging from contractual breach to ITAR.

While in law school, Elizabeth received the First Lap Award for dedication to the law school community. She also served as a summer associate in Collier Shannon Scott's District of Columbia Office (now known as Kelly Drye). In addition, she served as an intern in international litigation and military procedure with the United States Department of Defense, Army Judge Advocate General Corps at the Pentagon, where she researched legal issues surrounding the prosecution of the Guantanamo Bay detainees following 9/11.

The Catholic University of America Columbus School of Law: J.D.

Associate Editor of the Law Review

Junior League of Boston, past board member