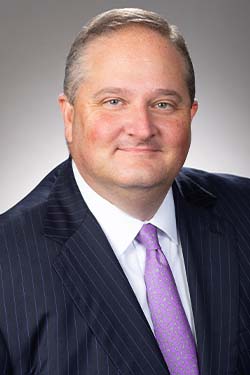 Greg Looser is focused on identifying general counsel, senior-level attorneys and compliance professionals for a broad range of global, national and regional companies and nonprofits. He uses his 27 years of experience as an attorney, public company general counsel, private equity general counsel and partner, and business advisor to guide clients in the structuring and growth of their teams.

Greg is an avid fly fisherman. He and his spouse, Beth, enjoy and are involved with the performing and visual arts both in Houston and New York. They enjoy global travel as a family and are the proud parents of two adult daughters who live in New York City.

Greg received his law degree from Baylor University School of Law. After a judicial clerkship, he began his career at Bracewell LLP. He next joined Pride International, Inc., a publicly traded global offshore drilling contractor based in Houston. Greg spent 12 years at Pride prior to its merger into what is now Valaris plc, becoming senior vice president and general counsel and later senior vice president and chief administrative officer. He later co-authored and has taught a case on Pride’s turnaround for The Wharton School of The University of Pennsylvania.

In addition to his active legal and business career, Greg is a leader in the Houston community. Greg previously served as president of the Texas General Counsel Forum, Houston Board, and as a director of the Forum Statewide Board. He currently serves as chair of the J.C. Walter, Jr. Transplant Center Task Force of Houston Methodist Hospital and is on the Board of Trustees of The Kinkaid School, where he served as board vice-chair and as an original co-chair of Kinkaid’s Diversity, Equity and Inclusion Council.

Greg is an emeritus director and two-term past president of the Board of Directors of Houston’s Ronald McDonald House and served two terms as chair of the Corporate Committee of The Menil Collection. He recently completed his service on the Board of Directors of Gridiron Energy, which manufactures the only high-efficiency, multi-energy nano grid appliance that combines cooling, heating and power generation.

The Kinkaid School, Board Trustee